FREE SHIPPING FOR ORDERS ABOVE $99 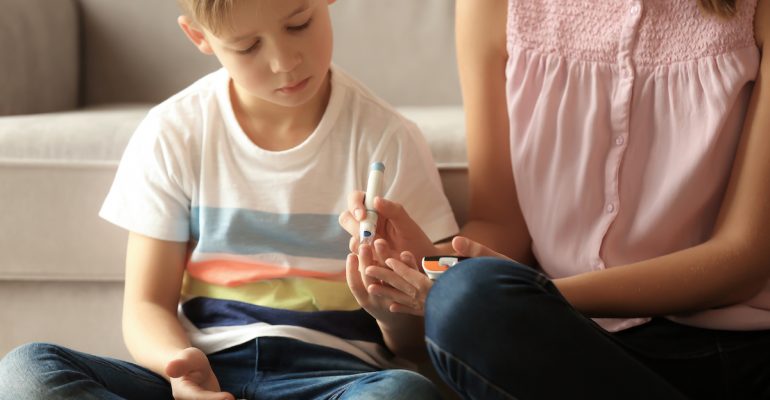 Diabetes mellitus is a very serious metabolic disor­der that prevents the normal breakdown and use of food, especially sugars (carbohydrates) by the body. It can damage the heart, blood vessels, kidneys, and neuro­logical system and can cause a progressive loss of vision over many years.

There are multiple forms of diabetes but the two most common forms are called type 1 and type 2 diabetes. Both forms can occur at any age, but a child is more likely to be diagnosed with type 1 diabetes.

Type 1 diabetes is caused by inade­quate production of the hormone insulin by the pancreas. When that happens, the body is unable to properly metabolize sug­ars, which build up in the bloodstream; these sugars (also called glucose) cannot be used by the body and are excreted in the urine. This leads to the major symptoms of diabetes:

While type 1 diabetes can begin at any age, there are peak periods at about ages five to six and then again at ages eleven to thir­teen. The first sign is often an increase in the frequency and amount of urination. This is often most notable at night, including recurrence of bedwetting in children who are potty-trained. However, the other cardinal symptoms must be present as well for the diagnosis of diabetes: Your child will complain of being thirsty and tired, will begin to lose weight, and will have an increase in appetite. It is important to identify these symptoms early, since children that are diagnosed late may become ill, because of the high blood sugars and dehydration, requiring intravenous insulin and fluids in a pediatric emergency room or critical care unit to stabilize their condition.

Although there is no cure for diabetes, children with this disease can lead a nearly normal childhood and adolescence if their disorder is kept under control. It is essen­tial to control diabetes properly in order to avoid complications. Management focuses on routine blood sugar monitoring, insulin therapy, given as multiple injections per day or through an insulin pump, and close regulation of a healthy diet. Maintaining blood sugars within a normal range can re­duce the likelihood of symptoms of high or low blood sugars and decrease the risk of long-term health problems related to poor diabetes control. In addition to a healthy diet, at least thirty minutes of exercise a day can help your child man­age their disease as well.

What Parents of Children with Diabetes Can Do

By working with and supporting your child as they learn to become more independent, you can help them gradually begin to take responsibility for caring for their diabetes while maintaining a sense of independence. Children above the age of seven typically have the fine motor skills to be able to start giving them­selves insulin injections with adult supervision. They can also check the sugar in their blood several times per day, using simple, chemically treated test strips and a blood sugar meter. However, these self-care tasks need to be supervised by an adult familiar with diabetes care to make certain your child is properly caring for their diabetes according to your doctor’s guidelines.

Developing good diabetes management habits when a child is young can have a dramatic impact on their management habits as they get older. Many communities also have active parent groups that are available in which the parents of children with diabetes can meet to discuss their common concerns. Ask your doctor for a recommendation.

COVID-19 and Diabetes: What You Need to Know About the Coronavirus

Leave your email to get all hot deals & news which benefit you most!
FREE SHIPPING FOR ORDERS ABOVE $99
We accept: